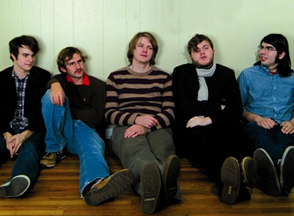 All told, I have a ridiculously good track record with meeting people from the internet. I’ve lost count over these last thirteen years, and can really only remember a few who turned out to be horrible. And perhaps horrible is the wrong word; a better term might be “tedious.” All told, self-selecting based on broad taste (hence meeting on topical forums/email lists), augmented by I’ve had worse luck with (conventionally-acquired) girlfriends and friends’ girlfriends and especially this one guy who really, really needs to get fucking killed before he ruins our friend’s life.

Anyway, a dude from the internet is in a band, and as before (and no doubt hence) I met said dude and saw said band at Trash Bar in Williamsburg a few Fridays back. And good goddamn! Shit was torn up.

A southern rock substrata got a bunch of indie rock sauce on it (see scarf above) but instead of either turning insipid or incoherent (a la Comets on Fire) the live set reminded me a bit of Akron Family if they focused on structure rather than texture. It’s always rought when you go to see a band because a friend or a friend of a friend is in it – or in the worst case scenario, because your friend is hopelessly in love with the bassist and honestly thinks he’s going to get within six feet of Xanadu because she smiled at him once. Conversely, it’s always nice when they put on a decent show, if only because you don’t have to lie afterwards about how great it was.

It is rarer than rare to be treated to a real treat, and if they’re in your area (at this time of the year your area would have to be Louisiana, but still) go see them play. Rough and throbbing, completely incongruous with the nice kid next door playing on stage; sounding like they’d been doing it for years, though I was told it was more like four months with their current lineup.

As I am wont to do, I bought some merch, in this case two copies of Midnight Matinee. Mastered by Bob Weston (yeah, that Bob Weston, not this Bob Weston) it sounds nice as hell, but feels very different from the live show I saw that evening. Far more gentle, the inventive structures remain largely intact across a wide range of variations. (As a side note, the digipak cover is neat, but no scans exist on the internet and no scanner exists at home, so you’ll have to use your imagination.)

Were one pushing for a label, the standout single is “Make Me Cry,” a piano and vocal harmony duel just shy of two minutes that flips into a doo wop battle with some great stops and starts. However, I nod towards the more conventionally rocky “Polar Bird” as the genuine hit of the album – it not only has the most obvious southern rock influences but chugs towards the intensity of Brass Bed‘s live performance; the end of Midnight Matinee‘s closer, “Killer Bees” does this as well, but I still prefer the former.

All told? Chalk one up for the internet.

May they go forth and gently conquer at SXSW.