The indie/hipster post-rock-label- label- label- grind-death-jazz-fusion thing continues to tear along in weird places. So you end up with some really good things, like Genghis Tron, but outside of the more extreme Casio grind bands you also have this post-rock/prog metal fusion that’s pretty popular. Off the top of my head you have Pelican, Cult of Luna, Jesu, anyone who’s ever put out anything on Hydrahead Records, and stuff like that. Wikipedia actually calls this “post-metal” but as the Father of Lies, we would expect nothing less. I will agree with the Lord of Fetid Hosts, however, in blaming most of this on Neurosis.

The biggest name among all of these newer folk is Isis. Friends of mind have been repping Isis fairly hard for a while now, but I’m two albums into this particular journey and I still just don’t get it. Panopticon struck me as being very flat, and while I do like the way the band plays together quite a bit, I think the singing is, at best, ill-considered.Well, that’s being nice. Since consuming In the Absence of Truth, what I’ve actually said is “Psst…Isis is Queensryche, pass it on!”, which is mean. I probably should keep these conversations to myself. But it’s true, and I am nothing if not a servant of truth.

Listening to In the Absence of Truth I’m struck by a few tracks, namely “Dulcinea” which manages to overcome their pop-prog shortcomings (or attractions if you’re into that sort of thing) and gel together quite nicely over seven minutes and change. The grunting and barking is toned down in favor of sublimation and tone, which is a massive upgrade. It is a much stronger album than Panopticon, which seemed unsure of itself, whereas everyone knows where they’re going with this release.

But nothing changes the omnipresent pounding sensation that reminds one that you’re still listening to Queensryche.* I will buy any instrumental albums they put out in the future, but otherwise this relationship is over.

The last time I saw Today is the Day was on this past St. Patrick’s Day, at the Knitting Factory. It was a tremendously good set by Today is the Day, but I showed up a bit late and only caught two of the opening acts. The first was a decently tight grind outfit saddled with an annoying singer. That’s more or less how these things work most of the time, unfortunately, because metal singing is pretty damn difficult to pull off well. And even if you do, you run the risk of having your voice fucked up, such as what seems to have happened to Steve Austin. Talk about sacrificing your body to metal, huh?

Anyway, I’ll do a good Today is the Day roundup sometime soon, but the second to last opening act was a heavily bearded crew of young men called Mouth of the Architect. This lead me to form a baseless and wholly awesome stereotype about bands and beards. The shorter the hair and the longer the beard, the more likely the band is to be great. I realize this is a lie, but in this case it holds. Four part harmonized screaming slathered on top of a backdrop that slips from a grinding sludge to very pretty post-rock guitarscapes? Count me in! 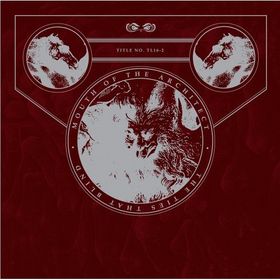 I realize that they’re similar in many ways to Isis and the other “post-metal” notaries. But there’s something in the way they carry off their material that’s more Mogwai than metal. And I like those drug-addled Scots quite a bit, so this is high praise. But with Mouth of the Architect, there’s a fixation on composition that is absolutely sure of itself, and doesn’t get quite so hung up on “pretty” and “aggressive” as being two distinct halves. It just also sounds…better? I’m sitting here listening to this album for the third time in as many hours and I’ve rejected using “classy” twice now. It’s not that it has more class than In the Absence of Truth – that’d be a silly claim to make – but it feels like it has more class.

The “post-metal” thing has its ups and downs, and the usual stereotypes. Much like IDM before it, the song titles share similar themes, replacing things like “vector_grasp23” or “COIoounN (for marjorie)” with “With These Hands I Build a Ship of Bones” and “Porcelain Crisis.” Rather than grasp at a shiny genderless future where there is only a few metallic tones and a single font (Helvetica, natch), this seems like more like an attempt to fuse Melville and Metal; alternately, it’s an attempt to bridge the violently joyful permanent adolescence of young men escaping various kinds of nerd labels into what was the most masculine musical form of their childhood. (Before you scoff, remember that hair metal bands, despite their appearance, still got the ladies.)

And both, of course, are trying to outrun large shadows (Neurosis, Autechre) in the form of oft-imitated founding fathers.

* Note: I am fully aware that there’s an umlaut in there somewhere. But seriously? Fuck those guys. I wouldn’t give Motley Crue an umlaut either. Or Motorhead, for that matter. Or Blue Oyster Cult.

Tagged as beards, indie prog metal with a jazz-tap twist, isis, mouth of the architect