It Takes a Tough Korean to Make a Tender MP3 Player 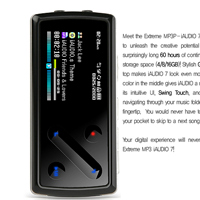 I had a Cowon F2 that I dropped a few too many times. My fault for buying something the size of a matchbook. Though I sometimes had a hard time holding it, it was also the nicest-sounding personal audio device (psst it’s the future!) I’ve ever had the pleasure of using to block out the horrors of that miserable junglist massive.  The EQ was as rich and bumpy as one can get.

I knew some folks back in the when who would give my ear a constant tug/shot to the nuts about their fine living ways. All good things must end, especially when they’re built on imaginary sand. Those people would – and did – spend a lot on a personal audio device, because those people had no fucking sense about ducats and discounts. And that’s fine for now. As we’re seeing, we need people to be driven by desire or the economy gets all kooky and people get moody and otherwise crazy.

I sought out the Cowon stuff because it was cheap and good. I dropped it a lot because the F2 was not made for human hands.

So after almost two years my wee one finally gave up and started stuttering and shutting off at odd moments. It still gave me 15 hours of battery life near the end, which was remarkable. (The Mini was a piece of shit that died within a year, even after a battery replacement)

About a hundred bucks or so is a reasonable price to pay for something I use at least an hour a day, five days a week. Why so little? Everything that lights up will eventually go dark. I’m sitting in a tunnel on a train where people occasionally poo. How much luxury does such a setting deserve?

So for a bit over $100 I get 8GB of storage, 50 something hours of battery life and USB anywhere capabilities. I take songs to work where I can charge it on the Mac and take songs back home to my PC. I don’t have to use iTunes. I probably can watch video on it but I figure that’s the job for the World’s Tiniest Travelling Masturbator.