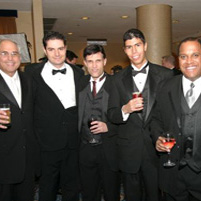 You’re a development officer; if you could hold a musical fundraiser, what’s your dream event lineup? Presume all the potentially offended parties have been slipped some MDMA and/or died.

If you had to soundtrack a montage of your recent experiences at ICON, what would be on it? Can it even be expressed in sound?

Gotcha. Slayer was my jam before every football game I played in high school. It was all about Slayer.

On a somewhat related note, I’ve told many a folk this but when I was a kid I never realized “cons” were real things – for some reason I thought that no one would ever dress up like a Star Trek character and that it had been invented by sitcom writers to create a wacky scenario for their characters. Needless to say my first and last ICON experience many years ago was mind-melting on several levels. On the plus side we got to see Frankenhooker.

Actual question: what do you think has driven the popularity of all these participatory, costumed events? My current explanation is methodically Barzunian, blaming it on several different cultural currents coming together to produce an entire generation of people who can debate the finer points of a dozen barely-connected plot threads but claim to be unable to understand how debt works or what FICA means. I figure if you can use the internet to find fansubs of “High School Demon Hunter With Emotional Issues And A Tail” you can probably use Wikipedia and a dictionary. Probably.

Hell, two more steps past that you can go to an actual library with actual books and oh dear my rotary phone is ringing again. Must be the milkman doing the Lindy Hop!

I think cons provide an experience close to that of the Internet for these kinds of people. The con is like a safe zone for people who find themselves otherwise misunderstood by “norms” and so the id runs wild and you see a lot of weird shit you probably wouldn’t see if it were the same dorks just hanging out at the mall. To have an actual physical space where you can act out like you can on the Internet (i.e. like a fucktard) because you’re surrounded by similar people without any real consequences. I think makes it really exciting for them and they will put up with any bullshit ticket price or mismanagement just for that experience.

So much of fandom on the Internet is sex-driven; you can find fanart or fanfiction for any situation and between any characters so easily and this same creepy sexuality permeates throughout these shows – I couldn’t help but see it everywhere. There was a teenage girl wearing only some kind of velvet nightie with just miles of cleavage with the words “FREE HUGS” written on her chest, stopping people and practically begging to be groped, not hugged. I saw her waiting outside the men’s bathroom and stopping guys as they came out – sort of the living incarnation of the camwhore who does not give a fuck who she solicits. Then there was the guy who grabbed his girlfriend’s chest and screamed “These are mine!”, and the girl sitting on some guy’s lap who gave me the stankest look for walking into the competitive video game room where she was obviously the resident girl. And then there was the masked fuck who slyly caressed my friend’s hand, and all the other skimpy and/or sadomasochistic tinged cosplay (male and female) that one can or can’t handle.

Then there are the panels: tentacle rape panels, NC-17 fanfiction panels, superhero S&M panels, furry taboos* and sexy art panels, on and on. The cons I think provide a sexual release that one can’t get just from jerkin’ it to a naughty Harry Potter fanfic. And because a lot of these people are so awkward, they need their fandom to have any kind of sex life. Dealing with all the responsibilities of actual sex are way too mature and so its easier to keep it fantastical all the time. So having a collection of the men/women-children gathered in one place creates a sexual undercurrent that I think gets a lot of them off. In real life you’re a slob, but when you’re dressed as Yuri-Chan from Sakura’s Melancholy Adventure you’re suddenly hot as sin. People will put up with anything for that I think.

*As an aside I really find furrydom to be the biggest joke of all. If people really wanted to live like animals they would eat, shit, and sleep in the woods, period. And in a weird way, I would have respect for that.

Have you ever nurtured a crush for a musician and then realized that they were actually terrible the whole time you were crushin’?
I thought Trent Reznor was really hot in high school. I don’t think Nine Inch Nails is terrible, but I do wish they were strictly instrumental a lot. I wish I could unhear a lot of those lyrics, when I listen to them now I do a lot of cringing.

I feel you there. I do love his production. I love how he’s put up multitracks from all of his songs for people to chop up and play with. But damn if I can’t get through The Downward Spiral, much less get past the vocals on any of the new stuff. Curiously, “Hurt” has held up a lot better than, say, “Gave Up”.

People complain about the aloof jerkoffyness of crowds at shows in the city. Is that a fair assessment, or should musicians stop expecting everyone to be a puppet to their greatness and fucking play already like the organ grinder monkeys they are?

I haven’t actually experienced too many aloof crowds at the shows I’ve been to here. The only real jerkoffyness was a guy who thought he could magically walk through me at a Boredoms show, but I’m going to blame drugs for that, not New York. Otherwise I’ve only ever seen people react positively by dancing or singing along, but even if people are just standing around with their arms folded, they paid for their ticket, so what’s the problem? It’s cliched, but everyone here is insanely busy, I think to have people actually show up should be the end goal, not to work people into some orgasmic frenzy.

Tagged as ask a..., have you ever met a guy with a "non-prophet" pun bumpersticker on his car?, we [heart] trent