This is a well-crafted love letter of sorts to the mid-90s. A little Basic Channel, a dash of Global Communications, and a hell of a lot of Higher Intelligence Agency. As such, it carries both the strengths (experiments with sounds and textures, lush for the sake of lushness) and weaknesses (severe repetition) of that moment in musical time.

Some objections: It is a bit baffling; it’s an an odd hill to die on; it often sounds like the weaker and more forgettable moments of the largely forgettable career of HIA* – but she’s enough of a tastemaker to inspire some copycats. Some of these copycats will go in new directions via inspiration rather than settling for echoing the echoes of an echo.

This warms my heart with nostalgia, and perhaps even – dare we say it? – hauntology.

* The fantastic matchups with Biosphere excepted, mind you. He helped transmute their laziness into gold.

Tagged as ambient techno is the soft dance of the future, haunt this, idm sensibility is a real idea, laurel halo, suckas

Hey y’all, I’ll be playing with Joe Salina (Isfet) on the 27th at Silent Barn in Ridgewood (off of the Halsey St. L train) next Tuesday night. We’re the opening act so we’ll be on around 9-ish, most likely. Nice mix of noise and dancehall and ambient techno.

Tagged as dhex, gonna make you sweat 'til ya bleed from your urethra, idm sensibility is a real idea, Live 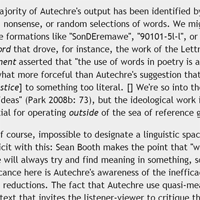 So I can’t honestly say if it’s good or bad yet.

It’s worth noting that the author was about four years old when the records he’s discussing started coming out.

Overall, I thought it was interesting.

I think the theory is overwrought (Adorno and IDM?)* and perhaps more than a little misplaced (Literary theory?). The author also  missed out on one key element of Richard D. James’ “fourth wall breaking” as he terms it in this paper. The “faceless DJ” was itself a memeplex, both internal and external; Aphex was, in part, pranking that concept by putting his face on everything.

As an aside, I have not read all of Simon Reynold’s Generation Ecstasy, but I do find his line about the “aut” in Autechre standing for autism funny. I don’t get it – go listen to Envane and tell me there’s no heart there, Mr. Reynolds! – but then again I didn’t have a bunch of fundamental drug experiences to rave back when it was a subgenre rather than an event description.

* My wife is somewhat in love with the works of Walter Benjamin, so this is the only place I can say “The Frankfurt School were all dickheads” without getting into an argument.

Tagged as idm sensibility is a real idea, this mechanical heart o' mine, waiter there's a buncha commies in my cultural criticism

Both Autechre and Warp Records are to be commended for offering an absurd variety of ways to listen to Oversteps. Vinyl, .mp3, 16-bit .wav, 24-bit .wav and CD. Since 320kbs is how most of my music ends up, I only spent ten dollars. I still feel a bit weird about that, since I have every other available CD release sitting on the shelf behind me. I know it’s the future and all, but I still feel a pang of regret, like something has been lost.

There are few regrets on Oversteps – it’s a little bit old, a little bit new. As I’ve mentioned before, the key to each Autechre release are their cover art. A black circle, clean upon first glance but on closer examination appears to be a bit smeared. A mighty grey san serif runs in the left-hand corner, top to bottom, with their name half-eaten by the black stamp.

Clear as a bell.

END_OF_DOCUMENT_TOKEN_TO_BE_REPLACED

Tagged as autechre, have you ever felt like this?, idm sensibility is a real idea, no one shops for records anymore, warp records

Whether intended to be a cute reimagining of the mid-90s intersection of acid and jungle or merely a nostalgia trip, Numbers Lucent is unfortunately another documentation of how the mighty have fallen into less-mighty ways. For all of the bright coloring (the cover art is amazing) in many ways this is merely a retread of Squarepusher‘s own work, especially Burningn’n Tree, itself a serviceable and enjoyable romp of straightforward bleepy drill n’ bass. While certainly not terrible nor badly-produced, this six song EP is also not very interesting for very long, though it helps that each track ducks out at around the four minute mark.

I admit to not really having paid much attention since Go Plastic; it would appear that my laziness was prudence in disguise.

There’s retro and then there’s frozen in time.

There’s a revivalist techno thing going on with labels like Dust Science and Soma, and specifically the resurgence of B12 and these guys.

A bit of history – back in the day, The Black Dog was the two dudes from Plaid (before they were Plaid) and Ken Downie. The two dudes left to go do their Plaid thing and Ken kinda fucked around for a while before hitting a new stride in the mid-00s. Beyond all the reissues there was some new material.

Now, if you did the whole “desert island discs” thing becuase you’re old enough to remember when such a postulation was a fun parlour game for music nerds, I would have put 1995’s Spanners album on that list. Very high on that list, in fact, as it is the essential IDM-sounding release. Warp Records + mid-90s + these guys = classic. It’s held up quite well as one long, flowing piece. Neither techno nor braindance, it can cut a rug but it’s a bit more meaty than beaty. And it just sounds so lush, so…like a hair care commercial talking about the wonders of thick, shiny hair, but with sounds that hit your ears. END_OF_DOCUMENT_TOKEN_TO_BE_REPLACED

Tagged as ambient techno is the soft dance of the future, idm sensibility is a real idea, nostalgia is a dead woman who hates you, the black dog

Genghis Tron – Board Up The House

This was another memorable record of 2008. Great big ole spasms right at the intersection of late 90s IDM and grindcore, with a taste for epic flourishes. It’s a bit more “mature” than Dead Mountain Mouth, in that there’s a slightly wider spread of styles, a handful of slowdowns before the big speed-ups. At its heart, however, Board Up The House is a jerky drum machine stutter, screaming about some kind of alienation, and lovely synth washes.

A highly-recommended Boards of Agoraphobic Canada.

Tagged as genghis tron, idm sensibility is a real idea, the death of loneliness

Back in the day Autechre clones* were commonplace, like dandruff or dour men in turtleneck sweaters. Like those things, they were just part of being interested in a “thing” or a “scene”; some went off into hip-hoppy directions like Push Button Objects; others did electro-influenced versions of early Ae tracks, like Accelera Deck. And there were the Germans, like Funkstörung and Arovane.

I know I heard Tides way back when (2000), and the impression was not favorable. However, I saw a copy of Lillies in a used CD shop in Maryland about a year and change ago and bought it. It was probably two or three dollars. It’s also apparently the last thing he ever released before falling off the face of the earth.

I only gave it a listen about a month ago, and while it is indeed 90s IDM from the 21st century, it’s very pleasant and engaging. It is what it is, and it seems perfectly happy. If I ran a lounge I’d play the title track during quiet moments.

* Or “artists heavily influenced by” if you prefer it that way.

Tagged as arovane, idm sensibility is a real idea, originality is overrated

Box Your Ears #2 – The Eyes of Stanley Pain vs. III

Continuing our theme of the Heroin Olympics, we examine two essential Download releases.

The Eyes of Stanley Pain – along with The Process – is the last real taste of Dwayne Goettel‘s work before he died of an overdose in his parents’ bathroom; the sound pallette is heavily techno, but the construction is far more Puppy-oriented. III is the emergence of an overt IDM sensibility, more Warp than anything “industrial,” and definitely several years ahead of the curve. END_OF_DOCUMENT_TOKEN_TO_BE_REPLACED