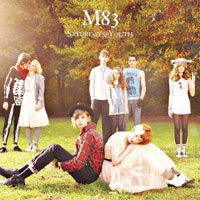 Every song on this album exists as the soundtrack to a perfect prom that exists only in the imaginations of relatively well-adjusted people. It’s intensely focused on delivering that feeling of what being young and invincible is imagined to have been like.

It’s almost a little too much at points but never quite crosses over into parody. It gets real close though:

I don’t know what to make of that.

But I do feel like putting on a prom.